This page tells all about solar systems. 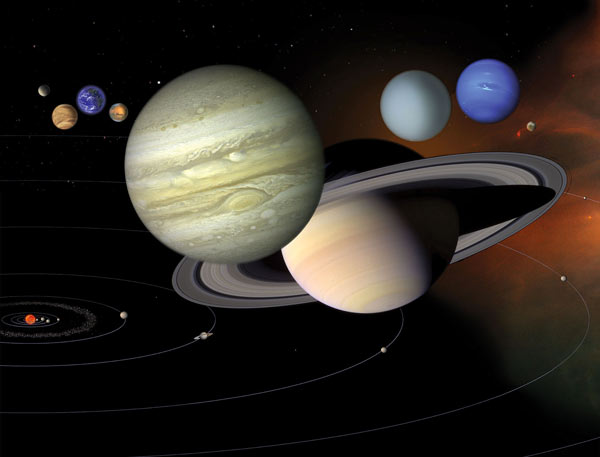 About Our Solar System

Our solar system is made of the sun and all objects bound to it by gravity. The sun is a massive yellow dwarf star that contains 99.86 of the mass of the entire solar system. Our solar system is located within one of the spiral arms of the Milky Way galaxy. The Milky Way Galaxy covers an area of about 100,000 light years and contains over 200 billion stars. The sun is optimally located in one of the outer spiral arms away from vast star clusters and potentially dangerous supernovas, resulting in a relatively stable solar system that, at least in the case of one planet, can support life. Depending on models that describe the outer limits of our solar system, it is a minimum of 50,000 astronomical units in size. An astronomical unit (AU) is the distance between the Earth and sun (93,000,000 miles). The resulting numerical description of the solar system would be a number that would be difficult to understand or conceptualize.

Scientists believe our solar system was created by the collapse of a massive molecular cloud known as the pre-solar nebula about 4.6 billion years ago. The solar system is heliocentric, which means all solar system objects orbit the sun. Objects orbit the sun in a counter-clockwise direction in an area called the ecliptic plane. A year is a term used to describe the length it takes for a planet to complete an orbit around the sun. Planets closer to the sun such as Mercury have shorter “years” whereas the outer planets have longer “years”. For example, it takes Neptune 164.79 years to orbit the sun completely, while it takes Mercury only 88 days. At various times during its orbit, a planet’s distance from the sun will vary. Its closest point to the sun is called its perihelion and its farthest distance is called aphelion.

What's in Our Solar System?

Four terrestrial planets, also called the inner planets, orbit the sun. These are Mercury, Venus, Earth, and Mars. Four outer planets orbit the sun (called “gas giants”). These are Jupiter, Saturn, Uranus, and Neptune. The border between the inner and outer planets is defined by a wide region known as the asteroid belt. The asteroid belt, which lies between Mars and Jupiter, consists of asteroids made of rock and metal. Objects within the asteroid belt are bound there by the gravity of Jupiter. Beyond Neptune lies the Kuiper Belt. The Kuiper Belt is a huge region of dwarf planets and icy bodies bound there by the gravity of Neptune. Pluto, formally considered the ninth planet, lies within the Kuiper Belt. Pluto is one of five dwarf planets in the Kuiper Belt, large enough to be be bound by its own gravity in the belt. Beyond the Kuiper Belt is a region called the Oort Cloud. The Oort Cloud is a huge area filled with billions or trillions of icy comets. The solar system also includes comets, the moons of the planets, and other objects.