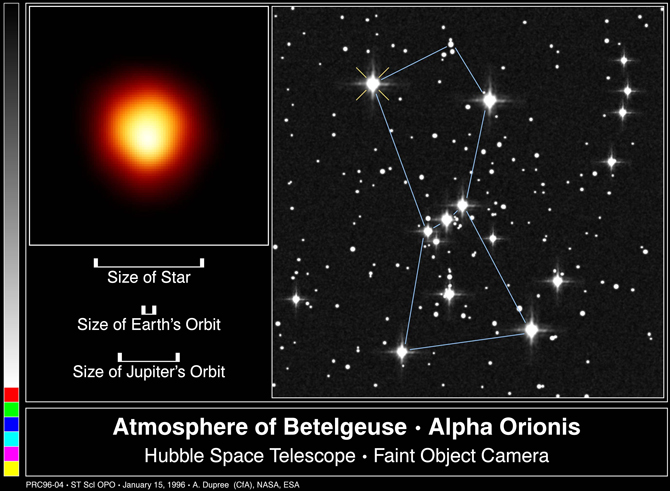 One of the Largest Stars

The sun may appear to be the brightest star in our sky, but beyond our solar system lies an even more massive red supergiant. Betelgeuse, a bright red star in the constellation Orion, is one of the most luminous stars in the sky, is 640 light years from our earth, and is 950 times as large as our sun. In fact, Betelgeuse is one of the largest stars we know: but it’s also nearing the end of its life.

Betelgeuse is at a specific stage in its life: that of a red supergiant. Red supergiants are dying stars that are in the last segment of their stellar lives. As stars develop over time, they balance the inward pressure of their own gravity with the outward pressure of the fusion process creating energy. When stars grow older, fusion slows, and gravitational pressure causes the star to compress inward so that it becomes smaller and tighter. Eventually, the star’s temperature increases, and its hydrogen shell heats up so that hydrogen fusion can begin again. Red giants are able to sustain themselves for anywhere from a few thousand to a million years, but eventually, they run out of chemicals for the fusion process. When that happens, the star shrinks, and an explosion in its core causes its outer layers to blow away in shells called planetary nebulae. Then, the star’s core continues to collapse until it becomes a white dwarf. This process will eventually happen to Betelgeuse when it runs out of fuel and implodes under its own weight.

The Death of Betelgeuse

Over the last 100,000 years, Betelgeuse has been shedding shells of its mass, hinting at a potential transition to the next stage in its life. Betelgeuse is expected to explode soon: but in astronomical speak, soon could mean sometime in the next million years. When supergiants shed their matter and become white dwarves, that mass can fall onto a nearby white dwarf, producing a large and bright explosion called a supernova. This future is inevitable for Betelgeuse, but in the next few thousand years, it is also expected to crash into a wall of interstellar dust. The collision is predicted to happen at a speed of 66,960 miles per hour - potentially having consequences for Betelgeuse that may occur before it even has the chance to become a white dwarf. One of the largest and brightest stars might be on track for the cosmos’ biggest car crash.