This article discusses the Kuiper Belt and its Trans-Neptunian objects. 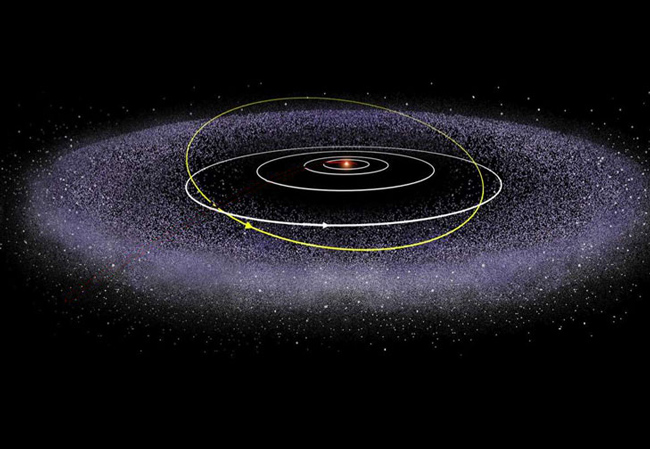 What is the Kuiper Belt?

The Kuiper Belt is a thick donut-shaped region containing millions of icy space objects and bodies. It is located just past the orbit of Neptune, and is one of the largest structures in our solar system. Contained within the Kuiper Belt are everything from rocks and ice to comets and dwarf planets, with rings and moons included. The objects contained within the belt are known as Kuiper Belt Objects or trans-Neptunian objects—one of which is a well-known dwarf planet called Pluto.

Observations of the Kuiper Belt

The Belt was likely created due to a combination of elements that were left over from the creation of the modern solar system. A group of small space objects came together to form the Belt; they might have integrated to form another planet, if Neptune’s orbit wasn’t so close by to alter their movement patterns and keep them apart. Scientist Gerard Kuiper first published a paper relating to the Belt in 1951. He didn’t necessarily discover the elements within the Belt, but wrote in his paper about space objects that might lie beyond Pluto. Today, the total mass of all the material within the Belt is equivalent to no more than 10% of Earth’s mass, because the objects in the Belt are slowly eroding away due to interference from the orbits of nearby planets like Neptune, Uranus, Saturn, and even Jupiter.

Haumea is an egg-shaped dwarf planet that exists within the belt. It is one of the few objects in the belt to have a ring system around it, as well as two moons. Haumea is about the same size as Pluto, and has the fastest spin of any known large object in the solar system: it takes four hours for Haumea to make a complete rotation. In addition, short-period comets that take 200 years to orbit the sun are thought to originate in the Kuiper Belt, and many objects in the Belt have uncommon orbit patterns—hinting at the potential presence of a larger planet somewhere in its midst.

NASA has attempted to explore the Belt in the past. Its Pioneer 10 spacecraft entered the region of the Kuiper Belt, but wasn’t able to explore any of its icy bodies or planets. In July 2015, however, NASA’s New Horizons craft flew past Pluto and its moons, making it the first spacecraft to visit a Belt object. Due to the cold, dark temperament of the region, we do not know for sure whether the Kuiper Belt can support life, but we do know it contains millions of intriguing space objects and orbits that demand further study.