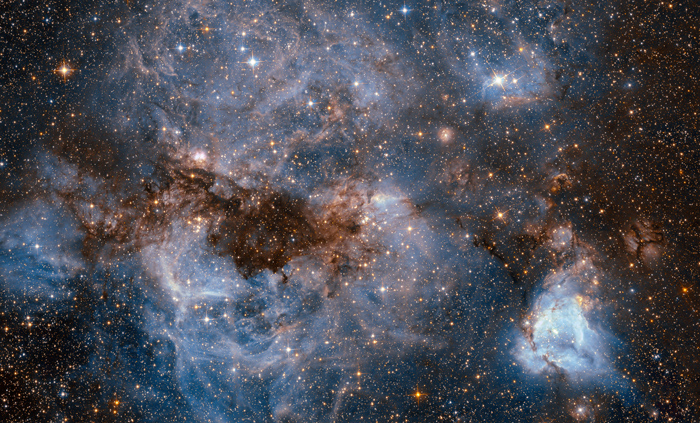 While the Large Magellanic Cloud may look like a faint, barely-visible cloud in the Southern Hemisphere, it is actually one of the closest galaxies to earth. Just 163,000 light years away, this satellite dwarf galaxy of the Milky Way was named for explorer Ferdinand Magellan. In 1519, Magellan and his crew became the first to sail all the way around the world. Throughout the voyage, Magellan’s crew took detailed notes on all of the phenomena they observed and brought that knowledge back to Europe upon their return.

Features of the Large Magellanic Cloud

The Large Magellanic Cloud is an irregular galaxy, as it lacks any distinct structure. Most galaxies, including the Milky Way, take on a common shape like a spiral or ellipse, but not this galaxy. The Milky Way might be responsible for altering the Cloud’s shape due to its gravitational attraction. The Cloud is one of dozens of galaxies that are part of a category known as the Local Group, encompassing the galaxies that are closest to the Milky Way and therefore easier for scientists to observe and study in detail rather than making predictions and theories. Due to the Cloud’s close proximity, astronomers were able to deduce that it makes one rotation every 250 million years.

One of the Large Magellanic Cloud’s most significant features is a site within it rife with gas and dust. This area is a common birth site for stars, as gas clouds frequently come together and collapse to form them and light up in different colors that NASA can observe with its powerful telescopes. In a specific part of the Cloud known as the Tarantula Nebula—the most active star-forming region in the Local Group—the Hubble, Chandra, and Spitzer telescopes revealed high levels of radiation and violence, indicating that thousands of stars were releasing material in that area.

The Large Magellanic Cloud was the sight of a supernova explosion in 1987, and may be on a path to collide with the Milky Way sometime in the future. Until that time, its relative closeness to Earth makes it a prime target for astronomers to study and understand the mechanics of star formation, as well as the structure of irregular galaxies.