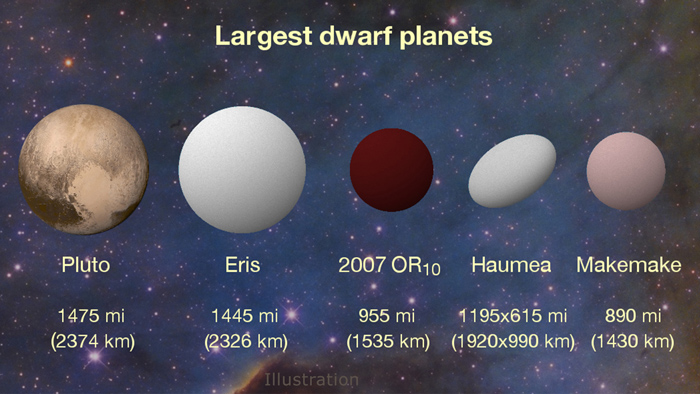 In 2006, the number of planets in our solar system dropped from nine to eight when Pluto was reclassified as a dwarf planet. Companies rewrote their textbooks to accommodate the new information, websites edited their depictions of the solar system, and astronomers readjusted their knowledge of the cosmos. But what exactly led to this shift in perception of Pluto, and what makes a dwarf planet different from a regular planet?

In many ways, dwarf planets bear similarities to the planets we typically study. Both planets and dwarf planets are in orbit around the sun, and are not satellites. In addition, both have to have enough mass such that their gravity is the most significant force affecting their shape. If an object in space is too small—for example, less than a couple kilometers in diameter—it is more affected by other astronomical forces and therefore takes on an irregular shape. Planets and dwarf planets are affected mostly by gravity, and hence have a spherical shape. The main difference between planets and dwarf planets has do to with the space surrounding their orbits. Planets use many methods, including capture, collision, and gravitational disturbance, to get rid of smaller space objects that enter the area near their orbits. However, dwarf planets are not able to clear objects that exist in the space around their orbits because their mass is not significant enough to do so.

As of now, there are five officially recognized dwarf planets in our solar system: they are Ceres, Pluto, Haumea, Makemake, and Eris. Ceres is located in the asteroid belt, and the other four can be found in the outer solar system. Pluto is the largest of the five, and is made up 1/3 of water. NASA has only reached two of the five planets for further study; in 2015, its Dawn and New Horizons space missions visited Ceres and Pluto. Therefore, we have only studied and observed Ceres and Pluto enough to be sure that they are dwarf planets. While we have identified five dwarf planets currently given the borders of space NASA has studied, there may be another 40 objects in our solar system that could be classified as dwarf planets if given more time and research. There could be up to 200 more dwarf planets located in the Kuiper Belt, and over 10,000 in the regions past the Kuiper Belt. The presence of dwarf planets in our solar system and beyond could be much more significant than it seems today: the further we progress in space travel, the larger our body of knowledge becomes.