This page tells all about mysterious, powerful, and possibly world-ending black holes. 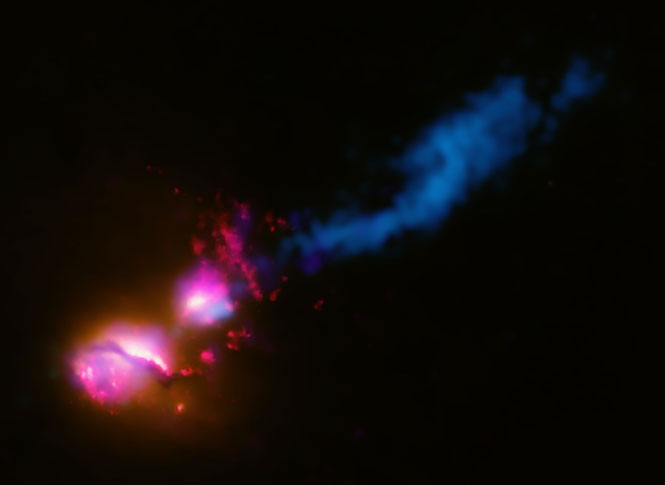 a jet from a black hole striking a galaxy - gov.us (Public Domain)

What is a Black Hole?

The mysterious black hole is thought to be the most powerful force in the universe. A black hole is a region of space with a gravitational force so powerful that nothing, including light, can escape it. It is defined as an incredibly dense region of space in which the escape velocity exceeds the speed of light. Escape velocity can be defined as the speed an object needs to achieve to break free of a gravitational force acting upon it. On Earth, an object needs to achieve a speed of about 6.5 miles per second to break free of Earth's gravity and not fall to the ground.

Black holes have a one-way surface called an event horizon. Objects can fall into the event horizon, but cannot come out. Interestingly, as an object moves closer and closer to the event horizon, its movement slows considerably, to the point that it will take an infinite time to reach it. This phenomenon is known as gravitational time dilation. A similar effect occurs between atomic clocks placed in different elevations. Eventually, the two clocks will begin to show slightly different times (in nanoseconds) because of the differences in gravitational potential of the two places.

Although black holes are invisible, scientists can predict their existence based on events that occur near them, specifically a group of stars that appear to be orbiting a region of space that looks empty, or, extremely high levels of radiation (that can be measured from Earth) coming from the gas emitted by a companion star.

Scientists have classified black holes into different types. A stellar black hole is formed from the gravitational collapse of a star. Supermassive black holes, found in the centers of galaxies, can be several billion times as massive as our sun. The hypothetical primordial black holes are thought to be smaller black holes that originated at the beginning of the Universe. A wormhole is a theoretical concept in which two black holes could be connected to each other. Some in the scientific community have used the model of a wormhole to suggest some amazing possibilities such as universe hopping (traveling quickly from one universe to another) and even a form of time travel.