This page tells all about galaxies. 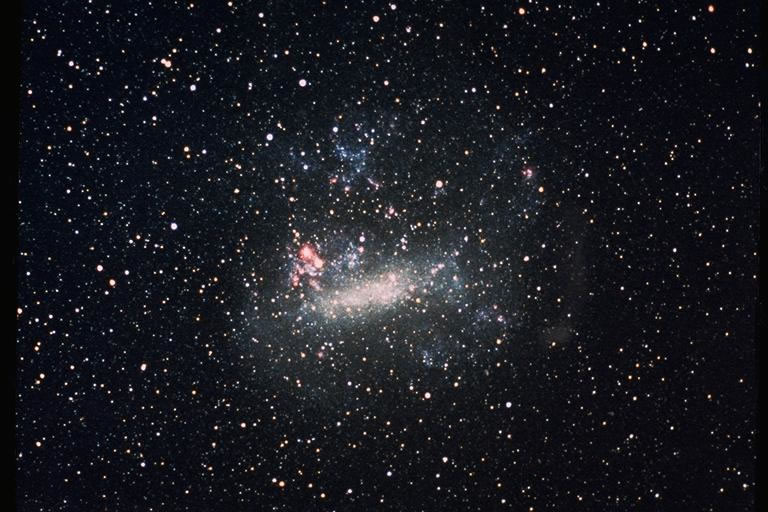 A galaxy is a massive complex or system of stars, remnants of stars, an interstellar medium of gas and dust, and dark matter. Some include multiple star systems, clusters, and interstellar clouds. Galaxies are bound by gravity and contain from millions to trillions of stars. The size of some galaxies are measured in units called parsecs, others are measured in light years. One parsec is equivalent to about 19 trillion miles (31 trillion kilometers). An average galaxy may extend from 1,000 - 100,000 parsecs. A light year is the distance that light travels in an Earth year. Light travels at nearly 300,000 km per second (180,000 miles). If you were to calculate the actual size of a galaxy using numbers, rather than the aforementioned units, the resulting figure would be impossible to understand or conceptualize. Galaxies are usually separated by spaces that extend over millions of parsecs. These vast spaces are called intergalactic spaces. Despite the vast distances between them, galaxies are often organized into clusters and superclusters. Clusters and superclusters are then organized into sheets and filaments. A filament, defined as structures that form the boundaries between large voids in the universe, are the largest known structures in the universe.

Galaxies are usually classified according to their shape. Elliptical galaxies are round, spiral galaxies are characterized by their long, spiraling arms, and peculiar galaxies are shaped irregularly, likely because of the gravitational pull of a nearby galaxy. Scientists estimate the presence of 100 billion galaxies in the universe.

About 90% of the mass of an average galaxy is made of up mysterious, invisible masses called dark matter. Dark matter is hypothetical; its actual existence is simply scientific and mathematical hypotheses. Only its gravitational effects on visible objects can be observed (such as the rotational curves of spiral galaxies). Some scientists think dark matter is concentrated in huge masses such as black holes.

Our solar system lies within the Milky Way galaxy. The Milky Way galaxy contains over 200 billion stars and has a diameter of up to 120,000 light years. Our solar system orbits around the Milky Way once every 200-250 million years. You can see the Milky Way galaxy on a clear night. It looks like a milky white band across the night sky. The center of the galaxy is located in the direction of the constellation Sagittarius. The Milky Way is thought to be nearly as old as the universe itself. Some estimates age the galaxy at over 13 billion years. It is part of a cluster of galaxies known as the Local Group. Two smaller galaxies and a number of dwarf galaxies actually orbit the Milky Way, the largest of which is called the Large Magellanic Cloud. Considered an irregular galaxy, the Large Magellanic Cloud is thought to be about 160,000 light years away from the Milky Way. Although our Milky Way is ten times larger, scientists estimate than 10 billion suns could fit in the Large Magellanic Cloud. The galaxy was first observed by explorer Ferdinand Magellan, whom the galaxy is named for and looks like a small night cloud in the southern hemisphere.