This page tells about planet Venus and includes an awesome video. 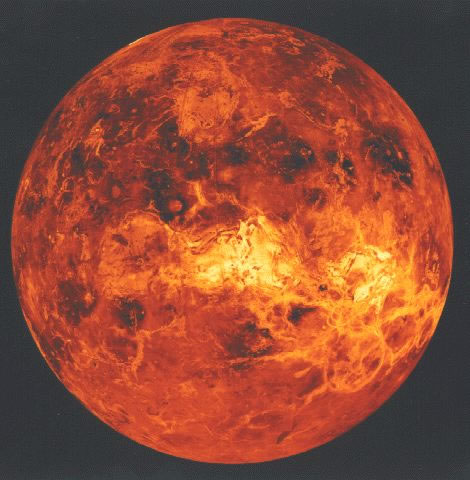 Venus is sometimes called Earth's sister planet, though its similarities with Earth are limited apart from size and relative condition of its surface. It is easily observed with the naked eye and is sometimes called the "evening star" or "morning star." Venus is covered by thick, noxious clouds of sulfuric acid that obscure a view of its surface. The thick layers of cloud create an extreme insulating effect (like the greenhouse effect) that radiates heat back to the surface and raises the temperature to over 800 degrees F.

Its surface is rocky, dusty, and dotted with mountains and canyons and a few volcanic hot spots. There are many lava flows. Some of the mountain ranges, including the Maxwell Mantes are enormous. Mountains within the 540 mile long range can reach heights of seven miles (much higher than the highest mountain on Earth). In contrast to the high mountains, about 65% of Venus is comprised of smooth plains. The pressure on the surface of Venus is intense. If you were to stand upon Venus, you feel the same amount of pressure you would if you were 3,200 feet underwater!

Venus is very similar in size to Earth and occupies about 95% of Earth's diameter. Venus is at least 80% as massive as Earth.

Gravitational force on Venus is similar to Earth. A 100 pound Earthling would weigh about 91 pounds on Venus.

The atmosphere of Venus is made mostly of carbon dioxide with small amounts of water vapor and nitrogen and even smaller amounts of argon, carbon monoxide, neon, and sulfur dioxide.

Venus is the hottest planet in the solar system. As previously noted, temperatures on the surface exceed 800 degrees F. The temperature in the uppermost layer of Venus's clouds, however, average a temperate 55 degree F.

Venus was the first planet to be observed by a passing spacecraft. The unmanned U.S. spacecraft Mariner 2 passed within 21,600 miles of Venus on Dec. 14, 1962, after traveling through space for more than 31/2 months.

Unlike most planets, Venus rotates in a clockwise manner.

A day on Venus would take 243 Earth days!