This page tells about planet Uranus and includes an awesome video. 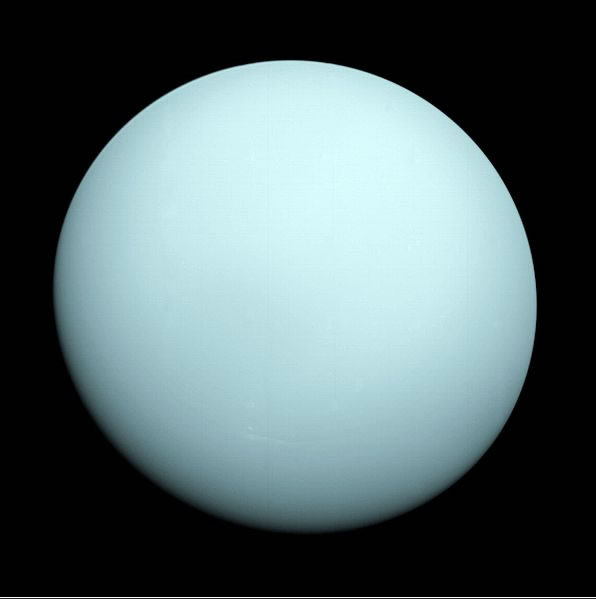 Uranus, the seventh planet from the sun, is one of two "ice giants". Its decidedly blue color comes from methane in its atmosphere, which absorbs red light. Uranus has a complicated ring system which was the second of such systems to be discovered after Saturn’s.There are currently thirteen known rings, which are comprised primarily of small particles which maybe the remnants of a shattered moon. All of the rings of Uranus are very narrow, with all being less than a mile or two in width.

How large is Uranus?

Uranus is the third largest planet in the solar system. It possesses nearly 63 times the volume of planet Earth. This means 63 Earths could fit inside Uranus if it were hollow. Uranus is 14.5 times as massive as Earth and has 16 times its surface area.

The atmosphere of Uranus is 83 percent hydrogen, 15 percent helium, and two percent methane. The planet is encircled by an icy cloud layer that moves about the planet at over 185 miles per hour. The planet is comprised of this gaseous atmosphere, an icy mantle,and a small, rocky core.The composition of Uranus and Neptune is substantially different from the other Jupiter and Saturn, prompting some scientists to refer to them as “ice giants.”

Temperatures in the outer cloud layer of Uranus dip to -371 F making it the coldest planet in the solar system. It radiates much less heat (has a low thermal flux) than other gas giants.

Uranus has 27 known moons, 13 inner moons, 5 major moons, and 9 irregular moons. All of the moons of Uranus are named after characters in plays written by William Shakespeare. The largest moon of Uranus is Titania (named after a character in A Midsummer’s Night Dream) , which measures over 900 miles in diameter and orbits Uranus from a distance of about 240,000 miles. It is the eighth largest moon in the solar system, though it is only about five percent as massive as the Earth’s moon.

The earliest known observation of Uranus was made in 1690 by John Flamsteed, who thought it was a star.

Because of its unusual axial tilt (in the direction of its orbit), Uranus experiences extreme seasonal variation. Its poles receive more energy from the sun than do its equatorial regions. Scientists believe its odd tilt was caused by a massive collision with a protoplanet.