This page tells about planet Neptune and includes an awesome video. 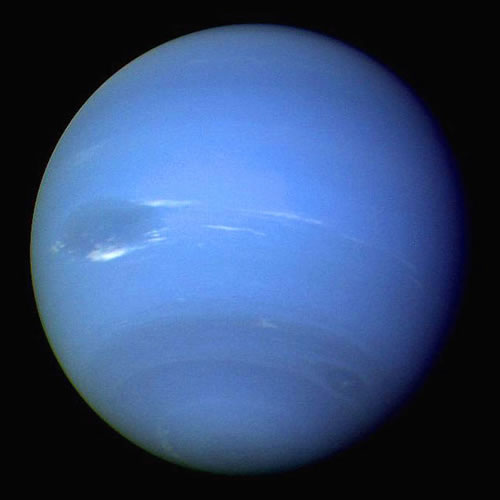 Neptune, the eighth planet from the sun, is one of four “gas giants.” Similar in composition to Uranus, the deep blue color of Neptune comes from the methane present in its atmosphere. Like Uranus, Neptune has a system of rings. Neptune’s rings are made of ice particles coated with silicates or carbon-based materials, giving them a reddish hue.

Unlike Uranus, Neptune sometimes exhibits a dark spot known as “the great dark spot.” The 8,000 mile long spot, which resembles Jupiter’s Great Red Spot, is a huge area of storm activity that is thought to represent a hole in Neptune’s methane cloud. Unlike Jupiter’s spot, however, the great dark spot seems to have a much shorter life-span and is cloud-free in the middle. There have been several of these spots that have come and gone on Neptune since 1989. Winds in excess of 1,500 miles per hour have been recorded within the spot, making it the solar system’s windiest place.

Neptune is the fourth largest planet in the solar system. It possesses nearly 58 times the volume of planet Earth. This means 58 Earths could fit inside Uranus if it were hollow. Neptune is 17 times as massive as Earth and has 15 times its surface area.

The atmosphere of Neptune is 74 percent hydrogen, 25 percent helium and one percent methane. Its atmosphere is full of fearsome storms. Other than the Great Dark Spot, Neptune has other named areas of storms like the Scooter and the Small Dark Spot.

Neptune has 13 known moons. The largest of those moons, Triton, was discovered a mere 17 days after Neptune was. The next moon wasn’t discovered for another 100 years. Triton is the seventh largest moon in the solar system and is large enough to be considered a dwarf planet if it were in orbit around the sun. Triton is very similar in composition to the dwarf planet Pluto and was though to be captured in orbit around Neptune from the Kuiper Belt. Triton is thought to have geysers that erupt with nitrogen on its surface.

Neptune was the first planet discovered by mathematical calculation. French scientists Urbain le Verrier is credited with discovering Neptune after his calculations revealed a large body was perturbing (gravitationally interacting with) the orbit of Uranus. Soon after, the planet Neptune was discovered via telescope less than one degree outside the location where le Verrier predicted it.

Neptune Video - Does it rain diamonds within Neptune?