This page tells about planet Mercury and includes an awesome video. 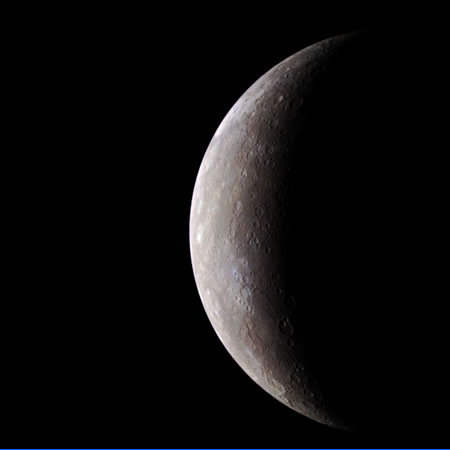 Mercury is extremely difficult to observe from Earth because of its small size and proximity to the Sun. Its surface is similar to the surface of the moon and is full of craters sustained billion of years ago from impacting comets and asteroids. The craters range in size from small bowl-shaped craters to craters hundreds of miles wide. One of the largest craters is referred to as the Caloris Basin, which stretches over 900 miles in diameter. Despite the craters, Mercury's surface is more uniform than the surface of the Earth, though it does have some ridges, high escarpments, and valleys among its smooth plains. Mercury also features unusual formations called tidal bulges. A tidal bulge is a kind of gravitational tide and happens because the gravitational force of one object on another is not uniform across its diameter. In the case of Mercury, its surface is warped in places where the sun's gravitational pull is strongest. The sun's gravitational force on Mercury is 17 times that of the moon's on Earth.

Mercury is the smallest planet. Its surface area only occupies about 15 percent of the Earth's surface area. It's only a little more than five percent as massive as Earth and only has 5.5 percent of Earth's volume.

Mercury's gravity is 38% the gravity of Earth. A 100 pound Earthling would weigh 38 pounds on Mercury.

Mercury has an extremely thin atmosphere that consists of atoms being swept off its surface by solar wind.

Mercury's orbit is highly eccentric. This means its orbit is not as circular as other planets.